When Campaign Against Arms Trade (CAAT) took the UK Government to Court over the legality of its decisions to approve arms transfers to Saudi Arabia for use in the Yemen conflict, hopes were high that this might prove a watershed moment in the struggle to bring the reality of arms export decision-making into line with the oft-repeated Government rhetoric of responsibility and restraint. 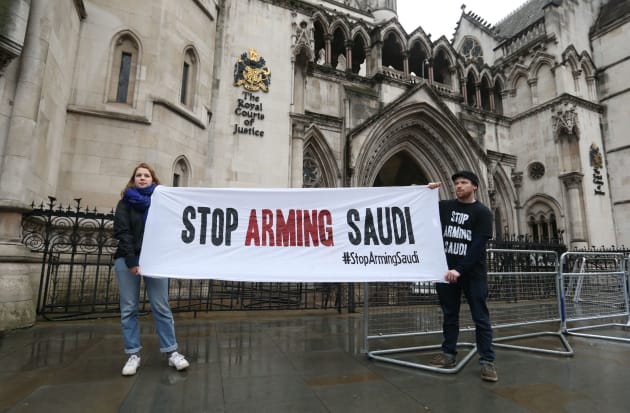 Campaigners hold a banner outside the High Court in central London, England on Feb. 7, 2017 where the legality of U.K. arms exports to Saudi Arabia were under challenge. (photo credit: PA ARCHIVE/PA IMAGES)

Alas, it was not to be; the High Court found instead that the Government was ‘rationally entitled’ to conclude there was not a clear risk that proposed arms transfers to Saudi Arabia might result in serious violations of international humanitarian law. This included transfers of fighter aircraft and air-dropped munitions to the Royal Saudi Air Force, which since March 2015 has been spearheading the Yemen air campaign.

The Court, it should be noted, was not saying there was not a clear risk, only that the Government had followed its processes to the point where it could not be challenged on grounds of being ‘irrational’.

Yemeni boy near a burnt car destroyed in a Saudi-led airstrikes in Sanaa, Yemen on February 01, 2016. (Photo by Mohammed Hamoud/Anadolu Agency/Getty Images)

Not only is the decision devastating for the people of Yemen, but it calls into question the credibility of the UK’s arms transfer control system and the UK’s commitment to the ATT.

The Decision suggests a level of Executive discretion in this field that can only be described as excessive. If UK Courts are unwilling to constrain the Government even in the case of Saudi Arabia in Yemen, where the ‘risks’ of at least some violations would appear to be way passed ‘clear’, under what circumstances would it ever find against the Government? Meanwhile, more and more information undermining the Government position continues to appear; in a 22 September 2015 email that has just come to light, the then UAE Ambassador to the US, Yousef Al Otaiba, refers to “increased targeting of civilian sites combined with the lack of humanitarian support” (emphasis added).

In Reflections on the UK High Court Decision on arms sales to Saudi Arabia, Roy Isbister of Saferworld examines various aspects of the Decision in detail, and considers its implications for the people of Yemen and for the future of arms transfer controls in the UK.

This site uses Akismet to reduce spam. Learn how your comment data is processed.